These deliciously golden cinnamon French toasts are truly a breakfast treat, but have you ever wondered if this dish really originated from France?

Was it from America?

There is a myth that French toast was actually invented in New York in the eighteenth century by an innkeeper named Joseph French. He named this dish after himself but simply forgot or did not know how to put an “s” with an apostrophe after his name.

In France, French toast is called “pain perdu” or “lost bread”. French bread easily get stale and hard and is “lost” quickly, but French families had to consume them anyway. So to make it soft and easier to eat, their way was to soak the bread slices in a custard mixture before frying.

It’s nice to know some bits of facts (or myth) about the food we eat, isn’t it? But French or not, this Cinnamon French toast will surely brighten your day! I recommend drizzling it with real maple syrup and serve it with fruit slices or with something savory like breakfast sausages and bacon. 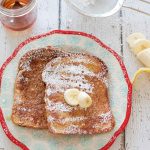 Rise and shine for this delicious Cinnamon French Toast! Brown and crispy on the outside and creamy on the inside. The addition of flour brings the a nice crisp texture while cinnamon and vanilla gives a flavor boost.
Prep Time5 mins
Cook Time15 mins
Total Time20 mins
Course: Breakfast
Cuisine: American
Servings: 4 slices

(Note 1) For thinner bread slices or generic white sandwich bread, be careful not to soak too much as the bread will disintegrate. (Note 2) Whisk the custard mixture before dipping another slice of bread because the cinnamon rises to the top and will disappear with your first few slices.