These brownies are rich, dense, and fudgy with a slight crunch from the top and edges, but the inside is soft, dark, and baked-until-just-barely set.

When it comes to brownies, are you team “cakey” or team “fudgy”? If you’re a fan of cakey brownies, go on to another recipe. But if you like your brownies rich, dense, fudgy, then this recipe is for you! I love the combination of textures of this brownie – there’s a slight crunch from the top and edges but the inside is soft, dark, baked-until-just-barely set.

This recipe was adapted from the book Baking with Julia, titled “Best-Ever Brownies”. I was very curious to see the outcome. The texture and flavor were great, but it was a bit too sweet for my taste. My version below yields brownies that are less sweet and have a deeper chocolate taste. The mixing method used is quite unconventional for a brownie wherein half of the egg mixture is whipped until it thickens and doubles in volume before adding into the chocolate batter. This extra step has enhanced and lightened the brownie’s texture.

These fudgy brownies never freeze solid, so this is also great to use as a mix-in for ice cream!

How to store these fudgy brownies 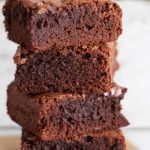